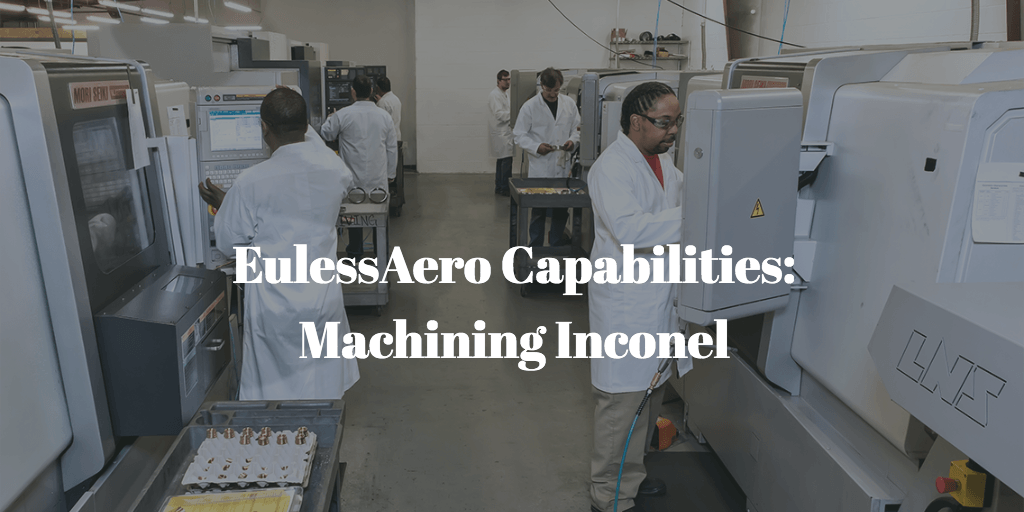 An inside look at one of the many exotic materials used at Aereos.

Such is the case in the aerospace industry – as jet technology progressed, this new technology outperformed the steel and aluminum planes of the time. Inconel was created in the 1940s in Great Britain to support jet engines being built there. There are many alloys of Inconel, all of them non-metallic irons, with nickel and chromium bases. These alloys are oxidation resistant and corrosion resistant, which makes them perfect candidates for the most extreme environments, including pressure and heat.

As steel heats to near its melting point, it can deform, making it unusable for high temperatures. Various forms of inconel have different ways to combat this phenomenon known as “creep.” As it heats, Inconel forms a thick, stable oxide layer that protects its surface from extreme heat and pressure.

The very characteristics that make Inconel such a valuable alloy are, however, the same reason it is so difficult to machine. As it heats, its thick layer protects the alloy from breaking down further. As it is tooled, it is also building a defense to keep it from being further worn down!

This video is a EulessAero employee machining a shroud segment of the compression segment of a plane’s APU. Most Inconel machined at EulessAero is tooled at 100 SFPM, meaning the Inconel doesn’t get hot enough to begin forming that strong oxide layer. This particular application allows for rotations seven times faster than normal machining, a tremendous feat for our production team.

The Auxiliary Power Unit powers the electrical system of the aircraft when the main engines are off-line. It provides pneumatic pressure for the aircraft interior air conditioning and is most active on passenger planes during boarding and deplaning. The APU also has the very important job of starting the main engines. So the next time you board a flight you’ll know that the APU is running the lights, the heating or cooling of the cabin and all those other electrical systems before takeoff.

Why is Inconel so important?

Consider the jet engines for which Inconel was first created. These engines at cruising altitude with outdoor temperatures of -50°F — but are creating combustion in excess of 2,000°F. Even with the best rapid cooling technologies, temperatures in jet engines far exceed most conventional metal tolerances. Add in the constant air pressure changes from landing to cruising to landing, flight after flight, and you easily see the need for these superalloys.

Inconel retains high oxidation resistance and tensile strength despite rapid changes in temperature. Inconel also has a high tolerance for pressure. Combined with its extreme temperature tolerance, this makes Inconel perfect for a variety of punishing operating environments.

A fast, continuous cut is important. This minimizes the risk of the Inconel alloy hardening mid-process. As you can see in the video, EulessAero cutting tools include ceramic materials and carbide for long, uninterrupted cuts.

Careful tool inspection is critical for maximizing quality in Inconel machining. Tolerances are never as critical as in the aerospace industry, so this is a main focus at all Aereos divisions. Tooling can have a reduced lifespan when used on tough exotic materials like Inconel. As Inconel hardens, tooling can wear out even quicker as heat and pressure build.

Some industries can begin with a solutionized piece of Inconel to limit the amount of work hardening. Depending on the part, this may be possible for certain parts EulessAero creates. When solutionized Inconel is used, it does reduce the wear and tear placed on machining tools. Stress-relieving before working the alloy can also help reduce surface hardness.

Cold-drawing metal is not an option with Inconel. It hardens the work surface and the alloy becomes even harder to work, causing more stress to tooling.

Whatever the exotic material, Aereos and its many divisions are familiar in its use and applications. EulessAero has been machining parts for its aerospace customers dating back to 1965; if you have it, we’ve seen it. Learn more about EulessAero and its capabilities here.

GET THE LATEST BLOGS